I love a good twist on a classic, and this dish is the perfect twist on classic stuffed bell peppers. We aren’t huge pepper fans in our house. In fact, you won’t see me using peppers in most of my recipes! If I do, it will ALWAYS be a red pepper or orange pepper.

This recipe is perfect for meal prep because you can make it all ahead and reheat it easily in the microwave. Plus, with the addition of the spinach, you’re getting all food groups in one meal! So, you cook once, and eat all week!

I like to pair this with a green salad or corn fritters, because it may not be enough all on its own. 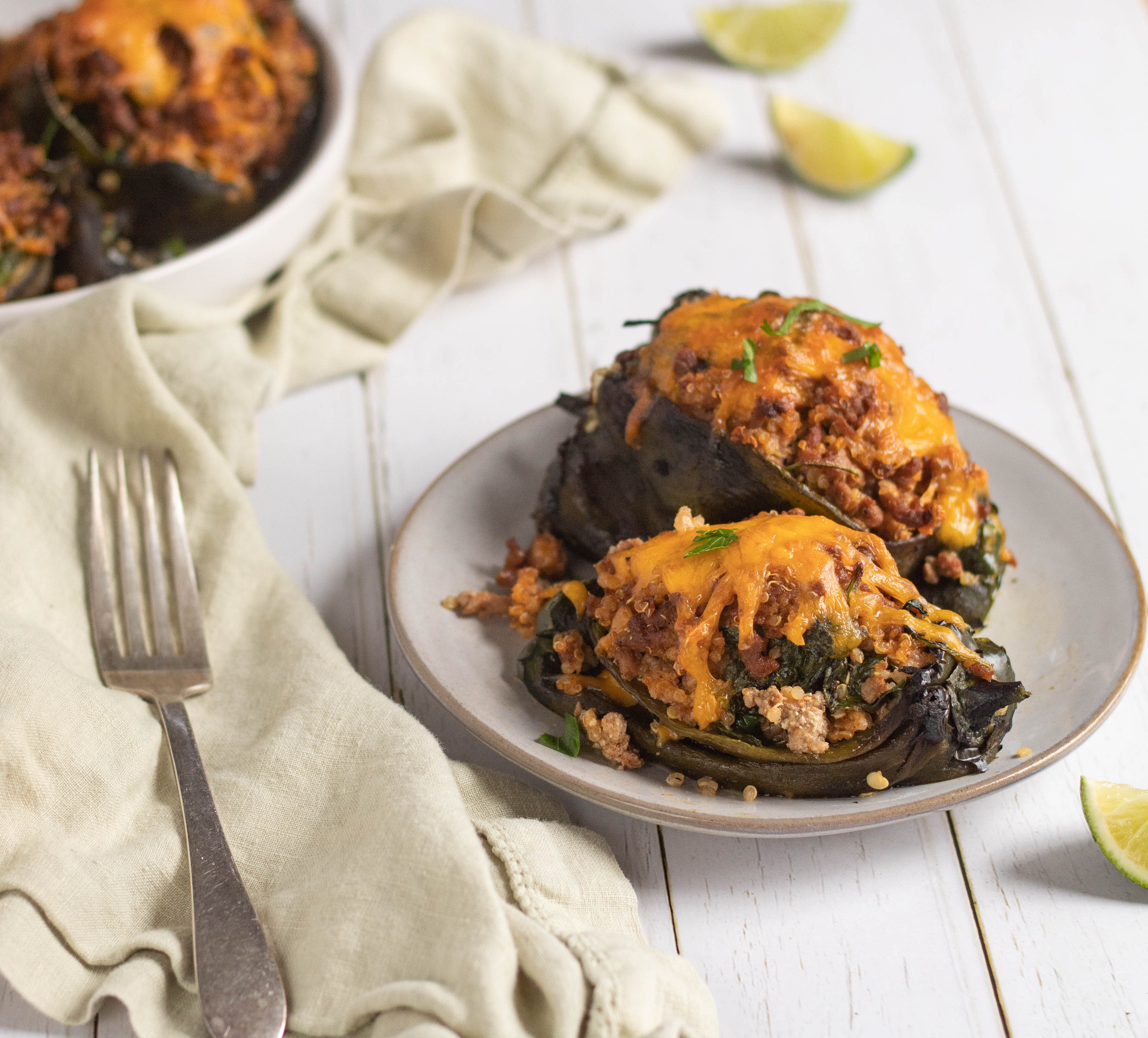 What I love about poblano peppers

Poblano peppers are the best peppers, if you ask me. They are just a little bit spicy, which adds so much flavor to any dish. BUT, they aren’t going to burn your mouth like a jalapeño or habañero pepper.

When measuring the heat of peppers, there is a scale called a Scoville scale. Poblano peppers measure at about 1,000-2,000, which is about half as spicy as a jalapeño pepper, and habañero peppers are rated at 100,000-350,000! So, as you can see, poblano peppers are mild in comparison!

Why do you “burn” the skin first?

Confession time. I don't really enjoy the texture of peppers. It almost feels like plastic to me, so I sometimes feel like I’m eating my kids’ play food from their play kitchen….not a fun experience!

By blackening the skin on the gas stove or under the broiler, you not only soften the overall texture of the pepper, but you also loosen the skin from the pepper, which makes it much easier to eat.

Simply “blackening” or “blistering” the skin and placing it in a ziptop bag makes it super easy to remove from the rest of the pepper before preparing the dish. 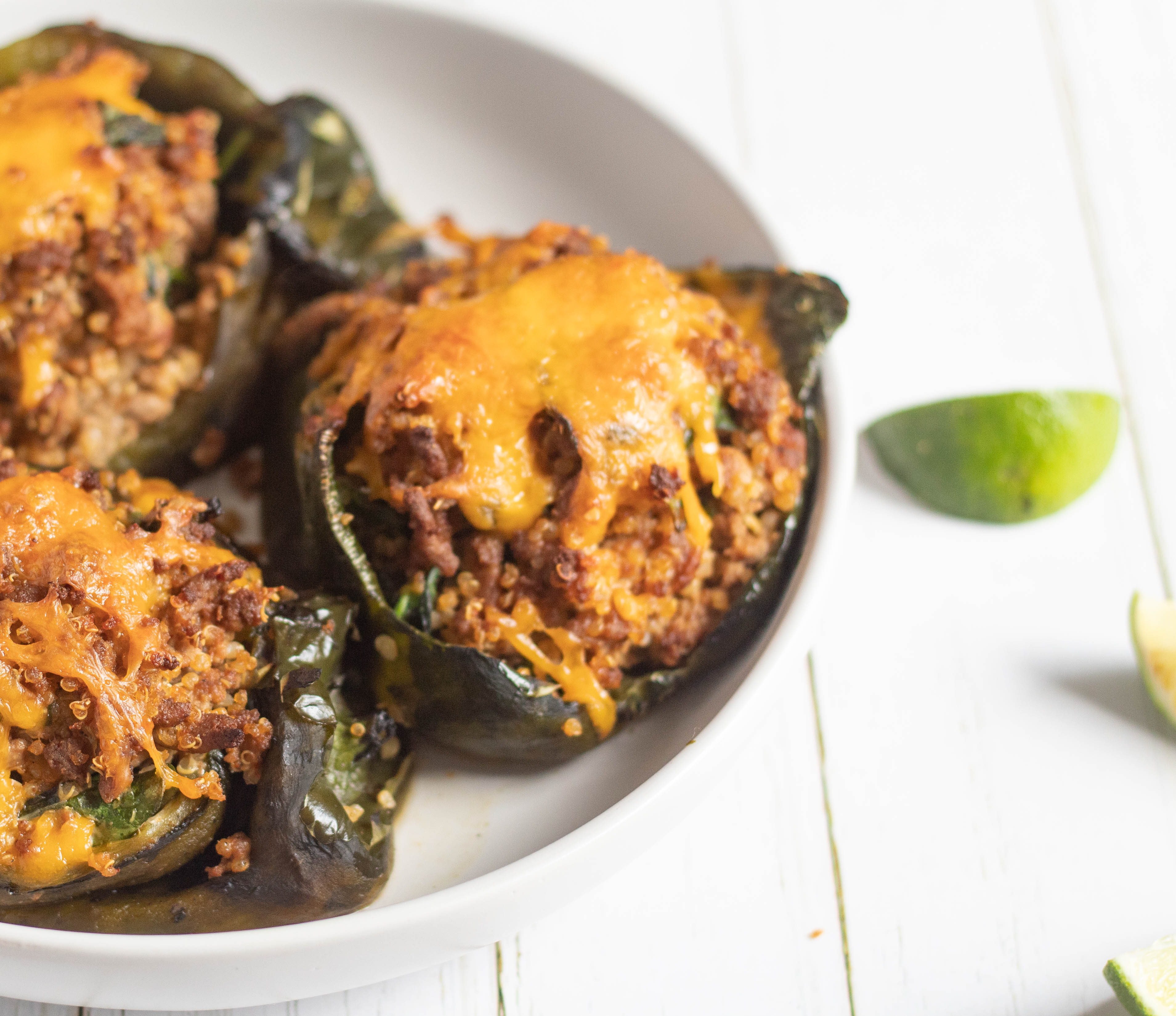 Why mix turkey and quinoa?

Simply put, I really like the texture of mixing the two ingredients. You get nutrients from both, including a lot of protein. The quinoa, though, adds a bit of extra fiber as well as iron, manganese, and magnesium.

So, why do we want iron, manganese and magnesium in our diet? Iron is super important for the transfer of oxygen in the blood. Manganese aids in the digestion of carbohydrates and cholesterol. Magnesium aids in nerve function. So, quinoa is clearly a superfood!

Can you leave out the turkey or quinoa?

If you decide to leave one of these main components out, you can also add in black beans and corn. It’s all personal preference, which is why I love cooking!

What do you need for these delicious stuffed poblano peppers? 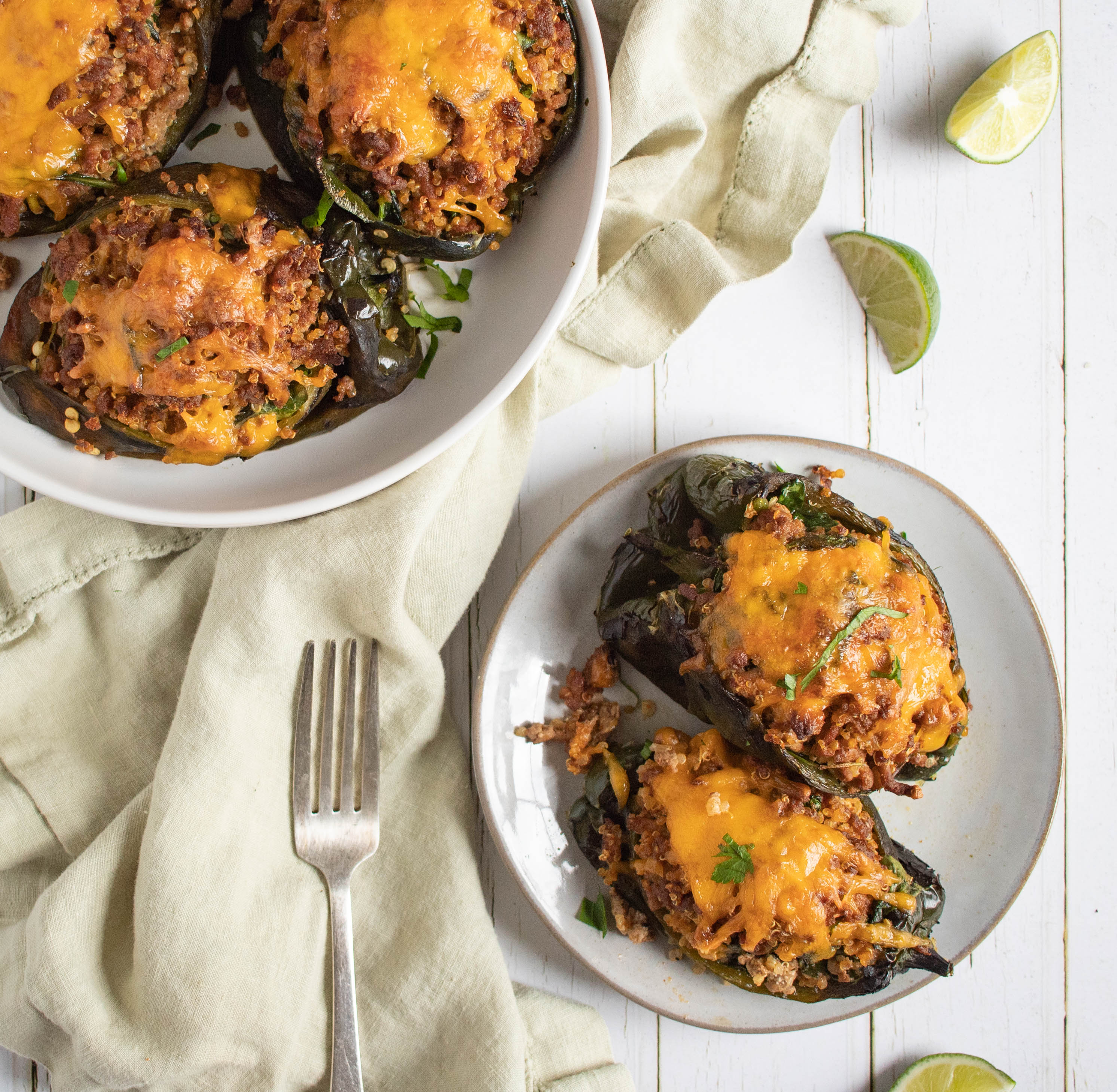 ENJOY! And as always, let me know what you think in the comments and over on Instagram @thesugarandsalt_co! 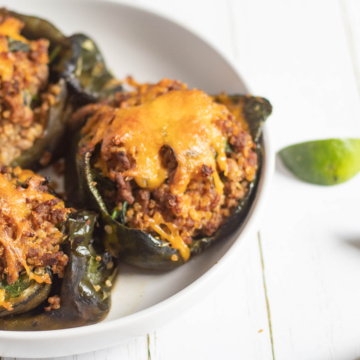 These stuffed poblano peppers have the perfect amount of spice, and are a great way to sneak in plenty of lean protein and veggies! Your family will love them!
Print Recipe Pin Recipe
Prep Time 20 mins
Cook Time 25 mins
Total Time 45 mins
Servings 4 people

Tried this recipe?Let us know how it was!

Hi, I'm Erica! Hi! I'm Erica, the creator of the sugar + salt co! With my chef-inspired, gluten free recipes, I take the fear out of the kitchen for the everyday home cook. Thanks for stopping by!