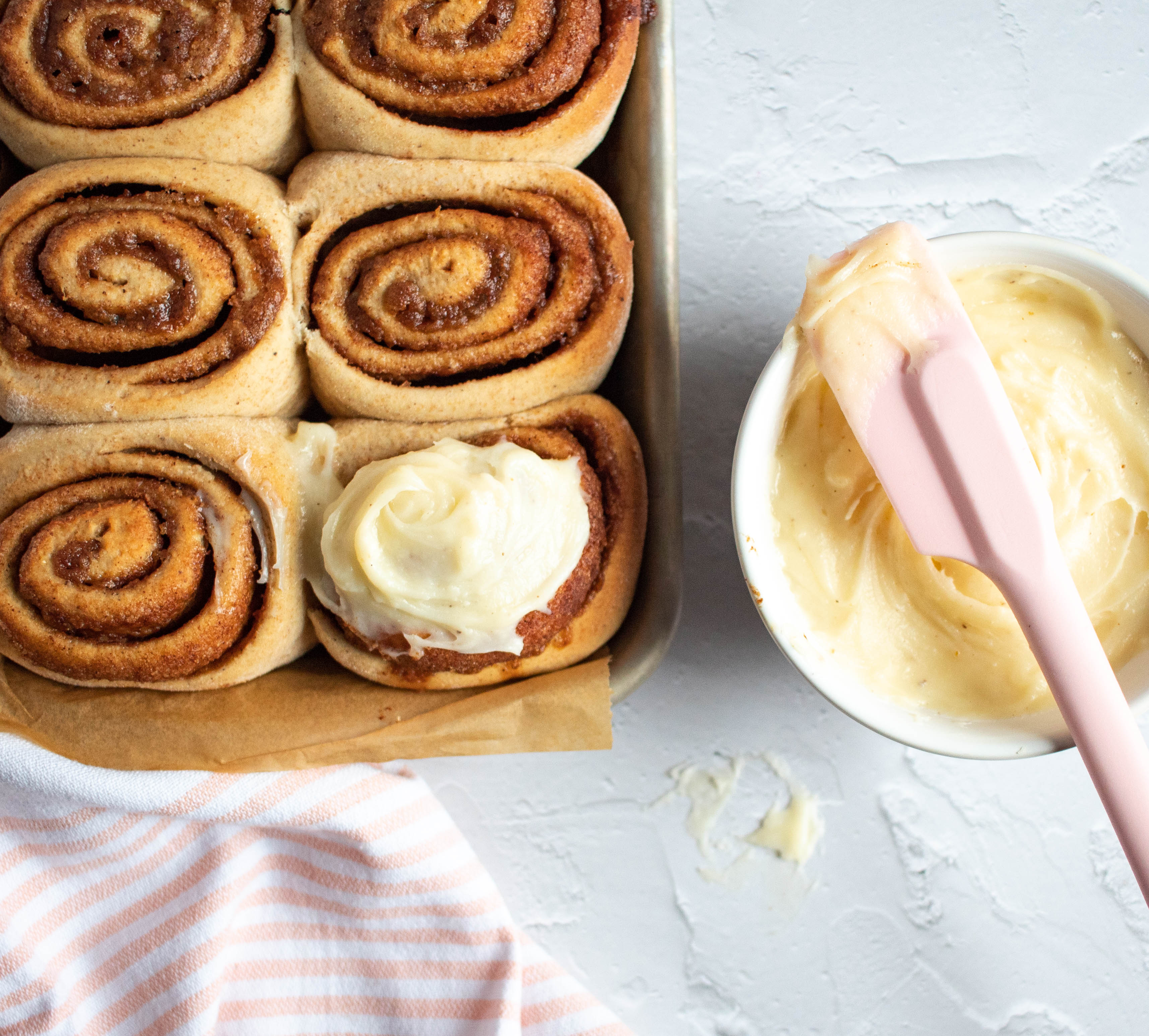 Cinnamon rolls are definitely my love language. I have them every year for breakfast on my birthday. It’s been a tradition for as long as I can remember. We usually just make the canned kind, which is so delicious, BUT there is something so satisfying about making them from scratch. From the smell of the dough to the pride in cutting the dough into pieces and seeing a perfect pinwheel, I just love the whole process. And it is a process!

So, what are the main ingredients of these delicious cinnamon rolls??

Cinnamon (of course!) – cinnamon is in every component of these cinnamon rolls, because I couldn’t imagine it not being there! It weaves its way throughout for the ultimate cinnamon punch!

Nutmeg – the classic sweet nuttiness of fresh ground nutmeg screams of celebration for me. It reminds me of classic eggnog with nutmeg.

Cloves – this just gives the perfect punch of flavor, am i right?!

All-Purpose Flour – I ONLY use White Lily flour for this recipe. It is light and tender, and really just don’t try to use anything else.

Whole Wheat Flour – Only use a very finely ground whole wheat flour. I like to use just a little bit, to add a bit of bite and to make these just a tiny bit healthier.

Bourbon – Ok, so bourbon is totally optional in this recipe, but really is it? I’m just saying that it adds a LOT of flavor.

How do we make these delicious cinnamon rolls? 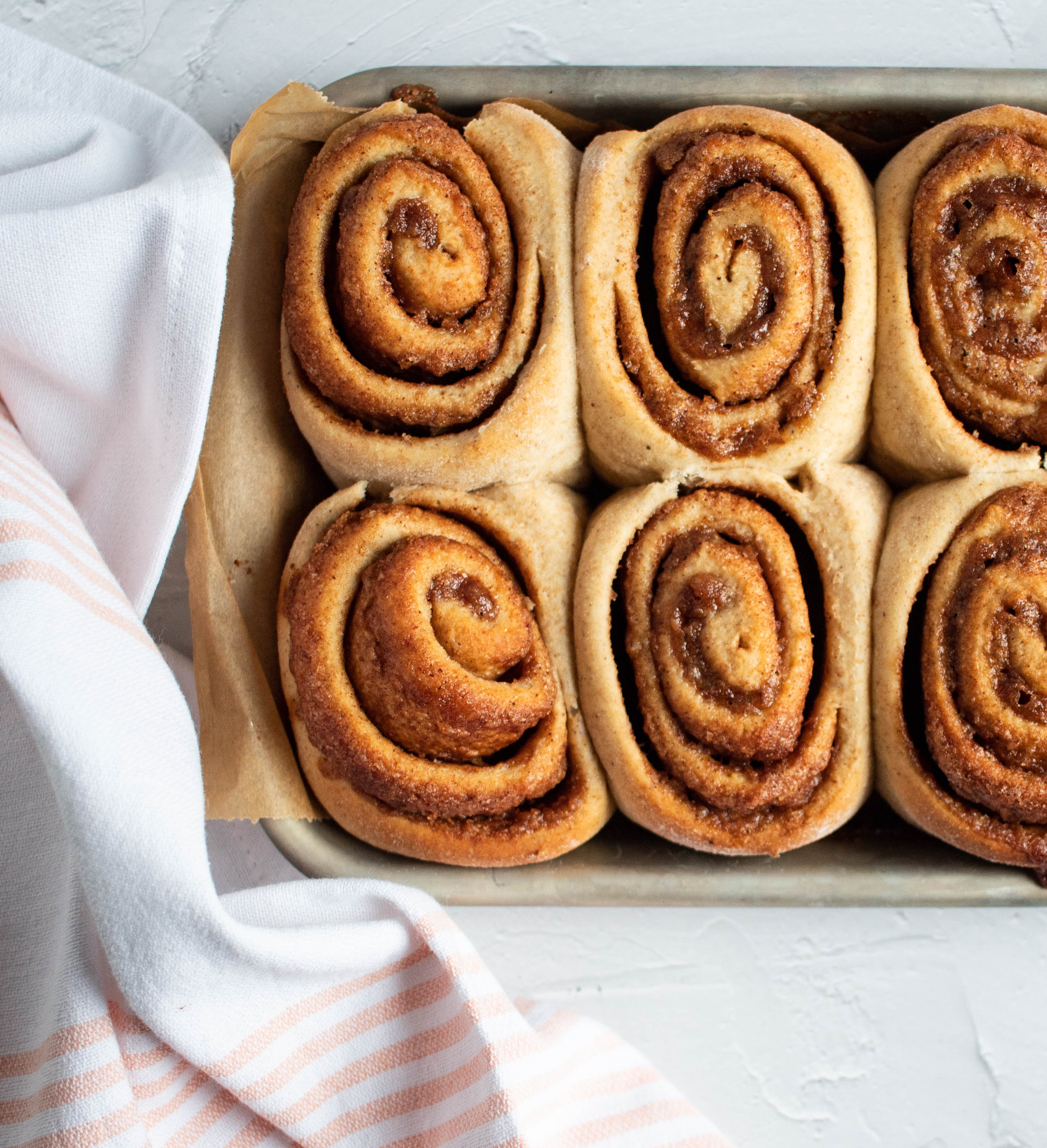 BEFORE YOU GET STARTED, MAKE BROWNED BUTTER. This recipe calls for a total of ¾ of a cup of browned butter. This is equal to 1 ½ sticks of unsalted butter. My recommendation is to just go ahead and brown 2 sticks of butter. There is usually a small bit of water content present in butter, and it will evaporate out when you brown it, so using 2 sticks will leave you with the amount you need.

To Brown your butter: Cut your butter into 1 inch pieces, and place in a small saucepan over medium-low heat. Let the butter melt slowly, and then gradually brown. If you are using cold butter, this will take only about 5 minutes or so. DO NOT WALK AWAY from your butter. As the butter melts, it will begin to smell like butterscotch. AS SOON as you see browned bits forming on the bottom of the pan, turn off your heat. The butter will continue to brown once the heat is turned off, and will be perfection.

Make the dough: In a small bowl, whisk together milk, sugar and yeast. Let sit for 5 minutes. NOTE: DO NOT heat your milk too much. You want it to be between 105-110°F.

Once the yeast mixture has had time to sit, whisk in applesauce, egg, butter, and vanilla extract. Place the mixture in the bowl of a stand mixer. Add all-purpose flour, whole wheat flour, salt, cinnamon, nutmeg, cloves, and baking powder.

Slowly turn the mixer on, gradually increasing the speed, until mixture is combined. Turn up to medium-high speed, and let mix 3-4 minutes, or until a soft dough forms. You want the dough to be slightly sticky, but not so much so that it sticks to your hands. Turn dough out onto a lightly floured surface, and knead 1-2 more minutes. Shape into a bowl, and place into a medium bowl that has been lightly oiled. Wrap tightly with plastic wrap and place in the refrigerator for at least 2 hours or overnight (overnight is my preference!)

Roll the dough and make the pinwheels: Once the dough is ready, roll into a rectangle that is about ¼ inch thick, measuring approximately 18 inches by 12 inches. Spread the filling mixture evenly over the dough, leaving about an inch of dough on all edges. Working from one end of the dough across to the other side, gently roll the dough into a pinwheel shape. Trim the ends of the dough off. Next, cut the pinwheel into 12 even pieces and place them on a small sheet pan that has been lightly oiled and lined with parchment paper.

Bake the rolls: Cover the dough pieces with a warm, damp cloth, and let rise for 30-45 minutes. When the dough is almost ready, preheat the oven to 350°F. Remove the damp cloth and place the pan in the oven. Bake for 18-20 minutes, or until lightly browned. Remove from the oven, and let cool for about 15-20 minutes. While the rolls are cooling, make the icing.

Ice those babies! To make the icing, whisk together cream cheese and butter in a small to medium bowl. Add powdered sugar, vanilla extract, cinnamon, cloves, nutmeg and salt, and milk (if desired). Very slowly begin whisking together. Once the mixture has begun to come together, increase speed, and whisk together quickly. Spread icing evenly over the cinnamon rolls and serve!

Did you make this recipe? Let me know what you thin over on Instagram @thesugarandsaltco!

Hi, I'm Erica! Hi! I'm Erica, the creator of the sugar + salt co! With my chef-inspired, gluten free recipes, I take the fear out of the kitchen for the everyday home cook. Thanks for stopping by!